Energy companies are dead already, they just haven’t realised it.

The stone age came to an end not for lack of stones, and the oil age will end, but not for lack of oil (Sheikh Yamani OPEC co-founder and former Saudi Arabian oil minister)

Electricity companies around the world will begin to go bankrupt by 2018, even while they generate profits. It sounds absurd doesn’t it? However, hear me out.

By now everyone has read the headlines. “Tesla Powerwall changes everything, electricity death spiral, energy storage revolution, the Kodak moment for electricity etc.” This was the hype of 2015. In 2016 reality set in, many households realised a $17,999 AUD 5kW SolarEdge system with a 7kWh Tesla Powerwall would take about 17 years to pay back. These were sobering figures considering most equipment warranties are only 10-12 years. However, in just 2 years this payback equation will be radically different. It will rock the very foundations of modern society creating and destroying fortunes across the planet.

It is not widespread adoption of energy storage that will hurt electricity utilities, but instead it is Grid Parity that incumbents should be concerned about. Grid Parity will occur in 2-3 years. Grid Parity is a clear short signal to innovative traders that the 100-year-old electricity delivery model is about to rapidly unravel. Grid Parity will be the stimulus for traders to invest in all manner of short instruments that can capitalise on the convexity that will soon occur in this space. Algorithmic momentum trading strategies will then cause many listed utilities that are running even conservative debt ratios (30% or less) to rapidly lose market capitalisation value, sending these previously conservative debt ratios to nosebleed levels.

Once a “whale” trader gets a sniff of this once in a lifetime opportunity the herd will all pile in crashing utility valuations around the planet in a matter of hours. The Plunge Protection Team[1] will provide a series of short term relief measures, suspending trading in these entities before valuations continue their inevitable and terminal decline. Make no mistake, this event, which is perfectly foreseeable poses serious global systemic risk.  Let’s join some dots and present the grid parity bear case.

In 2015 Bloomberg New Energy Finance released analysis showing long term costs in solar and energy storage had fallen by ~20-25%/annum. Shortly after in November 2015 Dubai achieved an earth shattering utility scale solar price of 3-5cents/kWh—cheaper than coal. Even at the residential scale solar is cheaper now than most retail tariffs around the western world. See chart below. 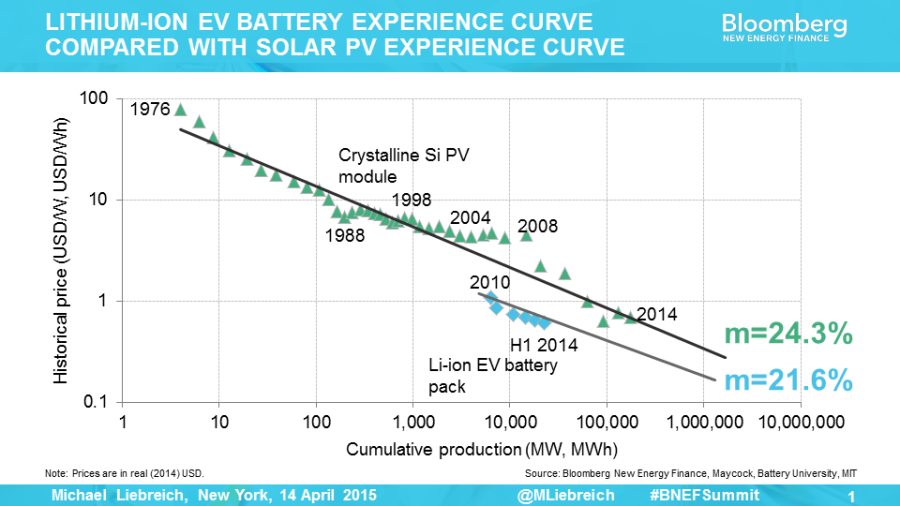 So using the above BNEF example and taking a conservative 20%/annum decrease[2] in prices the Tesla Powerwall SolarEdge package with a current price of ~$17,999AUD will become ~$8800AUD by 2018-2019 —for many households a payback of 4-6 years. This is radically different economics resulting in levelised cost of energy (LCOE) below 25.5c/kWh—grid parity or below in many countries and a short signal for innovative investors. Innovative traders and institutions should be purchasing Credit Default Swaps (CDS)[3] on incumbent utilities that look increasingly “subprime”.

The chart below illustrates technology uptake curves over the last 105 years. It is clear as digital technology began to proliferate the uptake trajectories steepened and many items reached saturation levels (>85% penetration) in less than ten years. So regardless of parity and profitability unless incumbent utilities radically transform their businesses in less than ten years they will be relegated to the dustbin of history.

At the industrial and commercial scale where the bulk of Gentailer revenue is derived, the economics of solar and energy storage are already in the 4-6-year payback range. Digital technology including Virtual Power Plants (VPP) as well as the multitude of other services outlined by Rocky Mountain Institute (RMI) in their seminal paper The Economics of Battery Energy Storage can accelerate solar and storage payback periods from the already compelling 4-6 years to as little as 3 years.

This should be truly terrifying to any incumbent Gentailer CEO and their shareholders. Yet worldwide most of the individuals managing these soon to be stranded assets are either in extreme self-denial, consciously lying to preserve shareholder value until they have developed a new revenue stream, or just oblivious to the disruptive technology on their doorstep. Unfortunately, all of these approaches create systemic risk more serious than what we experienced in 2008.

I contend that listed utilities around the world are what Warren Buffett and Ben Graham have termed “Cigar butt businesses”. Like a cigar butt you find on the ground they have one more puff of “goodness” before they are truly a disgusting investment. So the question I have is, if a little ole trader from Tasmania has worked this out, what large institutional funds around the world have also worked this out and how are they positioning themselves? Furthermore, who is going to pay for this rapidly accelerating train wreck that is likely to wipe out pension funds and small and large investors alike? Are energy companies Too Big to Bail (TBTB)? Stay tuned for Part 2 of our analysis—Trading Fossils into Extinction.

[2] When the Tesla Powerwall Gen 1 was announced by Tesla in May 2015 costs were ~$350/kWh just 6 months later Chevy announced its LG Chem powered Bolt had achieved pricing of ~$145/kWh.

[3] Credit Default Swaps were developed by JPMorgan and Blythe Masters in the late 1980s to insure the Exxon Valdez. Many traders, analysts and regulators contend it was CDS positons that exacerbated and dramatically accelerated the 2008 financial crisis following the collapse of Lehman. A CDS is effectively a bet that a company will default on its debt obligations and likely collapse.

CEC Accreditation: A0139528 (Including On & Offgrid Battery Certification)

We wouldn't exist without this guy. @advance_solar on our first commercial job in 2019 an @solaredgepv and @trinasolarglobal 25kW. #shortfossils
More flat roofs on the #southernocean. 8.8kW @enphase microinverter system invisible from the ground. We now have multiple sites in this little beachside town and more to come. So far, no time for surfs at lunch on these jobs but maybe the next ones! #shortfossils
This was one of the largest 3 phase @enphase battery installs in Tasmania when completed (9x1.25kWh in 2020). The house was huge (750sqm) with an indoor pool and ~$7000/annum electricity bills. We executed this project in two phases. First we integrated an existing @sma.solar 7kW system with a new 6.6kW @enphase microinverter system. We then gathered data for 12 months to determine battery requirements. The result.....this site is now a net generator of clean electricity and the bills are always in credit. The client has since sold the site and we will be working on their new project soon. Thanks to @advance_solar for your help as always. #shortfossils #netzero #wearenetzero @angustaylormp is a snoozer. @senatorsurfer
SOS new HQ. This is a clients site that we are lucky enough to call our office, warehouse, workshop and demonstration site all in one. Tasnetworks wanted to charge our client over $200k for a grid connection so we built an 11.78kW off grid solar system with @froniusaustralia Primo 8.0 inverter a @selectronicaustralia inverter charger and 24kWh of @powerplus_energy batteries and an 11kVA @dga_generators for less than $70k and no power bills ever again. If you would like to chat to us about off-grid, residential or commercial solar give us a call. Thanks to @advance_solar and also to @jesterricho28 for making it fun and keeping us safe. Hati-hati! #shortfossils
Flat roofs on the Southern Ocean with @jesterricho28 . @froniusaustralia Primo inverter and @trinasolarglobal panels.
Big arrays in the big smoke with @advance_solar and @solaredgepv